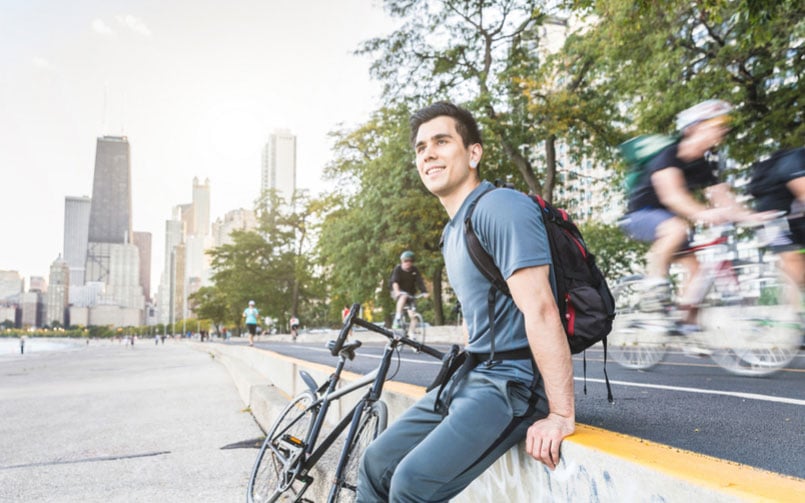 Bike lane designs are growing in creativity and style all around the world. 10-15 years ago, nobody was thinking about installing more bike lanes. That has completely changed in recent years, as some of the biggest cities invest money into the development of bike lanes.

A prime example of awesome bike lane design can be found in Denmark—which is considered a paradise of sorts for urban cycling. Completed in 2014, this awesome bike lane forges over traffic and water, weaving across the city like a long snake, hence how it got its name.

The bike lane is literally a suspended bridge that offers a safe place for bikers and pedestrians to navigate roadways. The bridge joins two parts of the city, and has quickly become an architectural trademark.

A bridge dedicated to cyclists is not all that common, but the designers behind this bridge think it’s a great idea (and we agree!). Denmark is known for its vibrant bike culture and this unique bridge for cyclists pays tribute to that. Dissing+Weitling Architecture, the brilliant minds behind the bridge, explain that it was important to keep the bridge sleek and narrow so that it’s “not trying to be more than it actually is.”

The bridge is made of steel and is a vibrant shade of orange so that it’s easy for cyclists to see it and navigate across it. In 2015, shortly after completion, it was awarded the Big Arne Award. Furthermore, it gained attention by scoring the WAN Transport Award the year prior, and the Raise the Bar prize in 2013.

Just like the Bicycle Snake bridge in Denmark, this bike lane in the Netherlands proves you don’t have to use existing roadways to implement a successful bike lane. Instead, you can build up. This is especially useful for busy cities with heavy traffic and limited roadways. The Netherlands is also well-known for its urban cycling culture. After all, this is the same place you’ll find the viral Starry Night bike path inspired by Vincent Van Gogh.

The concept architecture and technical design is credited to ipv Delft. The 240-foot circular bike path is suspended by 24 cables and serves as the unofficial entrance to the city. Bikers and pedestrians can utilize this unique circular bridge to pass over traffic. The bridge has several different pathways that snake off it, allowing you to take a multitude of directions.

Created in partnership with: Ben Hamilton-Baillie

This Cheshire village is home to 16,000 people and at the center is Fountain Place and Park Lane. As many as 10,500 vehicles and pedestrians navigate through the space each day. Designers took an interesting approach to make the area friendlier for cyclists and pedestrians. They created an open shared space where vehicles must slow down to accommodate cyclists sharing the roadway.

They created a series of informal crossings or “gateways” that define highways from city centers. Drivers are met with a complete change in roadway scenery as they approach these circular crossings. The goal was to highlight areas where the road transitions from a highway to a city center. The designers incorporated different paving and narrow roads to slow down speed as drivers approach the circular spaces intended for cyclists, pedestrians, and autos to use in harmony.

Check out the unique shared space in this YouTube video: https://www.youtube.com/watch?time_continue=227&v=-vzDDMzq7d0

4. Glow in the Dark Bike Path

Researchers at Texas A&M created a glow-in-the-dark bike lane that is bright yellow during daylight hours and literally glows at night. They used Dutch intersection design and solar-powered paint, as well as recycled materials, to bring the glowing bike lane to life.

The bike lane is specially designed to reduce “conflict points” that motorists and cyclists face, thus improving visibility for everyone and increasing safety. It is very common for traditional bike lanes to put bikers in the path of automobiles with driver blind spots. For instance, a cycler who wants to go straight or turn left is forced to travel in the path of a vehicle turning to the right. This unique glow in the dark path forces drivers to look back and to the right to avoid accidentally hitting cyclists. The design was implemented in the Netherlands years ago, but is very new to the US.

Check out this YouTube video to see the bike lane design in action: https://www.youtube.com/watch?v=FlApbxLz6pA