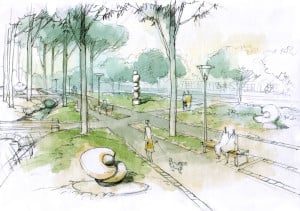 Landscaping is a particular job that requires a wide variety of talents and skills; you need a thick understanding of plants and foliage, along with the ability to think creatively and see design details before they ever emerge. We find it so inspiring to learn about well-known landscape architects of the past, how they started their career and how they made their mark on the industry. It takes more than just ability and drive to become a popular landscaper; you must also work well with others and have a great sense of patience. Ruth Shellhorn worked her way from the bottom up to become a well know landscape architect, eventually taking on jobs as grand as Disneyland.

Who Was Ruth Shellhorn?

Born in Los Angeles, California in 1909, Ruth Shellhorn knew at an early age that she wanted to be involved with architectural design, and thanks to a well-intentioned neighbor her interests were guided in the right direction. After attending Oregon State College with a major in Landscape Architect, Ruth went on to the College of Architect at Cornell University. Her work proved festive enough to make the cut for Disney, although sophisticated and professional enough to be applied at emergency medical buildings and college universities. Her vast and truly admirable career spanned a time when most women were not pursuing landscape architect. Throughout the 57-years she dedicated to outdoor design, Ruth Shellhorn did everything from big corporate projects to private gardens of well-known names. In 1971, Shellhorn was recognized as a Fellow of the American Society of Landscape Architects.

Walt Disney learned firsthand how complicated landscaping could be when crafting Disneyland. At first Walt hired two men who had landscaped his Holmby Hills home, but quickly he realized that a strong background in horticulture and exotic plants just wasn’t enough to give Disneyland the premier landscaping Walt envisioned. After asking around for advice, Walt uncovered the landscape architect he’d been seeking: Ruth Shellhorn. Walt Disney himself was intrigued by the design work Shellhorn created for Bullock’s Department Stores, offering her a chance to show off her skills at the famous Disney theme park.

Ruth was hired to work at Disney in 1956, starting out with only one project she quickly went on to earn more work. “Before I knew it,” she wrote in one of her personal diaries, “I was saddled with another job – to design paving and planting for New Orleans by Swifts.” Ruth wrote in her diary, imaginably overjoyed at the opportunity to meet Walt Disney himself and work on such a grand project. Although it wasn’t all fun and games, her diary (kept at the UCLA Charles E. Young Research Library) contains some rants and raves about what it was like to be the only woman on Disney’s central design team. It wasn’t just her gender that caused conflict, the mass of the project made decisions difficult to come by and the entire process overwhelmed her, according to her most personal thoughts. Ruth had a complicated job; she had to create a landscape design that spoke to all ages visiting Disneyland Park, and she had to be careful not to interfere with walkways or overall function, considering the mass amount of people that visit the park daily (Full Article).

What Parts of Disneyland is Ruth Shellhorn Responsible For Designing?

Many different architectural designers played (and continue to play) a role in Disneyland’s origins and continuous expansion, the areas of Disneyland Shellhorn helped create includes the actual entrance to Disneyland and Disney’s comprehensive pedestrian circulation system. She also helped design what is known as the Plaza Hub, where decorative planters and specially arranged bushes and trees open up to a circular walkway. If the weather isn’t just right, a large center display full of flowers can be transformed into a refreshing waterfall. Ruth was also responsible for helping design Main Street—you know where all of the good ice cream and souvenirs are located. She was given instructions to create a small town feel, which she executed perfectly with quaint looking shops and concrete sidewalks that boost delightful bursts of color. Using both standing planters and hanging planters, Ruth incorporated a pop of color amid the rows of brick and concrete shops.

Ruth Shellhorn retired in 1990 from her lifelong career and passion. She passed away nearly 16 years later, in November of 2006. She was 97 years old and had lived a long and successful life. In the Los Angeles Times Obituaries, Shellhorn is cited for her love of exotic plants and the many in-depth diaries she kept, offering insight to her ingenious designs. Ruth Shellhorn continues to inspire landscapers today; the depth of her design ability will always be remembered, along with her perseverance for pushing her way into a male-dominated career despite the associated challenges.