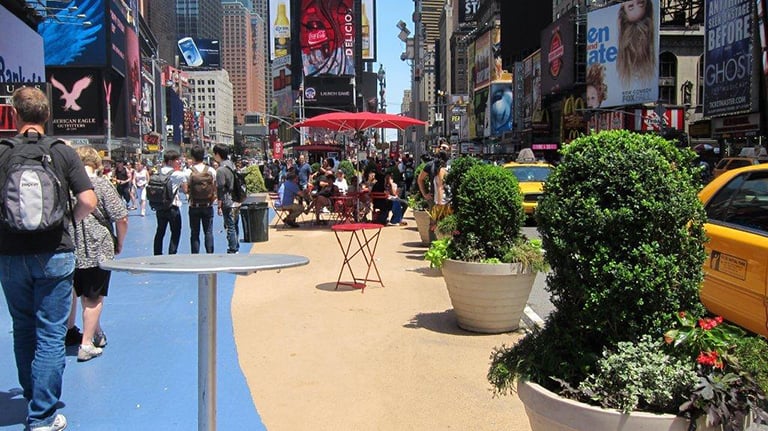 Recent transformations to old and outdated portions of NYC have resulted in incredibly innovative urban spaces, all of which include the use of TerraCast planters.

Janette Sadik-Khan served as New York City’s transportation commissioner between 2007 and 2013, during which time she made vastly positive changes to some of the oldest portions of the city. She transformed a number of crowded, useless and complicated streets into friendly spaces where people can actually sit down, grab a bite to eat and enjoy some good people watching—which is truly the best in NYC.

TerraCast is proud to see our one-of-a-kind resin-based products incorporated in these public spaces. This stands in proof that our material is able to stand up to some of the most heavily trafficked streets in the world.

One of Sadik-Khan’s largest projects included redoing a historic section of Broadway located in midtown Manhattan. This project was completed back in 2009 and transformed one of the city’s oldest streets into a modern and useful space.

Broadway slices through the street grid system, creating seemingly misplaced intersections and awkward triangular spaces. Due to its poor design, the area was constantly overloaded and congested both on the streets and the sidewalks. So what were urban designers to do with this awkwardly ancient street?

Using innovation and imagination, the city redesigned 2.3 miles of Broadway stretching from 14th Street to 59th Street. As a result of their efforts, they were able to develop an impressive 65,000 square feet of pedestrian plazas, while also relieving traffic and increasing safety. Pedestrian seating areas have been incorporated along Broadway’s Times Square, Madison Square and Herald Square.

In 2010, the midtown project underwent extensive evaluations. The Department of Transportation determined that traffic times had been improved and taxi speeds had increased by 7%. During this same time, the actual volume of pedestrians in Times Square increased by 11%, and Herald Square experienced a 6% increase in pedestrian traffic.

Thanks to her incredible work, Sadik-Khan is now busy traveling to other cities in aims of improving more public streets. She operates as the principle of transportation for Bloomberg Associates, the consulting service owned by former NYC mayor Michael Bloomberg.

Here is a closer look at some of the urban project developments that took place in New York City. All of which rely on the unmatched quality of our resin-based products to achieve the overall look and function of successful urban spaces.

Pearl Street was Sadik-Khan’s first NYC project. Pearl Street started off as an awkward triangular chunk of wasted space used as a few oddly placed parking spots in the DUMBO neighborhood. It is now a bright and intriguing area for people to gather, socialize, and enjoy the city in all new ways.

Helping add to the beauty and attraction of this area are a wide variety of resin-based TerraCast planters blooming with a necessary dose of urban greenery. Shortly after the plaza’s completion, the city commissioned Brooklyn-based artist David Ellis to paint a mural in the plaza to further add to its appeal. The renovated space is viewed as a grand success.

In 2009, on the tail of her Pearl Street success, Sadik-Khan moved onto a section of Broadway in Times Square. Times Square is easily one of the most popular destinations for tourists coming to the Big Apple.

In 2011, shortly after completion, the new plaza made the list for Crain’s top 10 retail locations in the whole world.

Located on 51st street, between 6th and 7th Avenue, there’s an installation for all ‘Potterheads,’ aka Harry Potter fans. Here the NYC Department of Transportation created a new street marker citing 6 ½ Avenue in tribute to the famous Platform 9 ¾ from Harry Potter.

Along with the clever sign, the city expanded pedestrian space and added large decorative TerraCast planters overflowing with greenery beneficial to the overall health of the city and its people. The newly designed area now allows pedestrians to walk through a lovely space that runs between 51st and 57th Street.

There’s a reason our products can be found all throughout New York City, as well as many other cities. It boils down to the fact we offer the highest quality on the market. Our specially made resin-based products are capable of outlasting any and all comparable products regardless of weather, wear and tear or any other factors.

Our resin is highly resistant to stains, rust, and corrosion. Plus, thanks to the fact it’s non-hydroscopic, it doesn’t allow for moisture or water damage. As a result, our products provide a long-lasting durability with no maintenance needed. Even if someone adds graffiti to one of our planters, you simply need a Mr. Clean Magic Eraser to remove the evidence.

On top of all that, we proudly support the American dream by keeping all of our offices and manufacturing facilities right here in the States. And did we mention our products are eco-friendly? All of our products can be recycled and our black products can be made from nearly 100% post-consumer recycled materials. Our products may help you qualify your project for LEED points and credits. Plus, we support green manufacturing processes through our use of natural gas and reclaimed water.

In terms of sustainability, longevity, and overall appearances there’s nothing better than TerraCast Products. You might call us biased, but then again why else would some of the largest city projects with high critical acclaim rely on our products? The answer is simple…. TerraCast rules supreme!