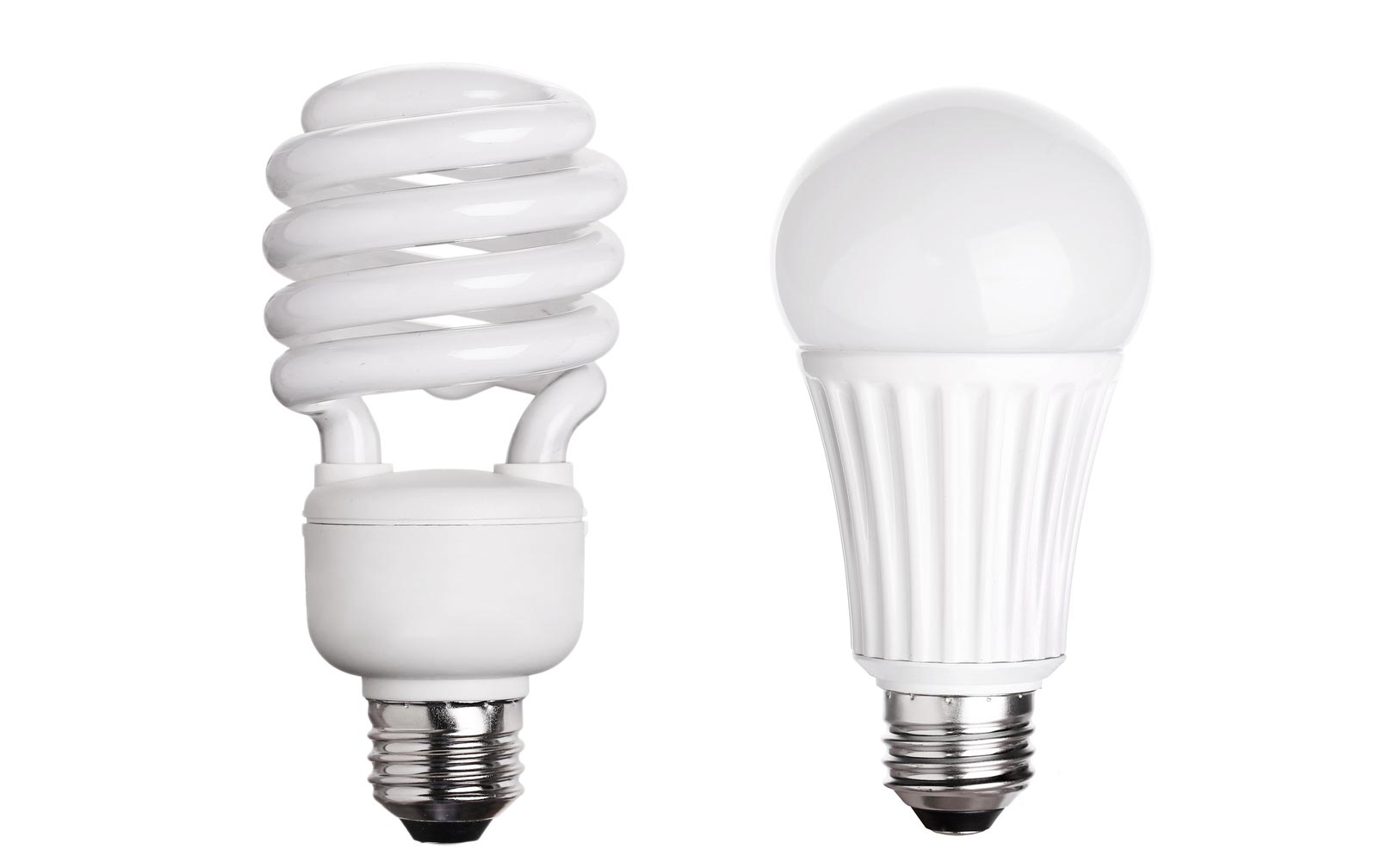 Before the invention of LED light bulbs, people used CFL light bulbs as an energy efficient solution. To this day many people still utilize CFL light bulbs, but there is some controversy regarding how safe these fluorescent-based bulbs are.

According to some researchers, CFL bulbs are dangerous to your health for a number of reasons. More on that later, but first, what’s the difference between CFL bulbs and LED bulbs?

CFL Bulbs Vs. LED Bulbs: Here Are The Differences

Both CFL bulbs and LED bulbs were made as an energy efficient alternative to previous lighting fixtures. LED bulbs are the newer kids on the market and as a result they offer a lot more benefits and added energy savings.

CFL bulbs were made to take the place of incandescent bulbs, which generate light as a result of heat. CFLs use just 1/5 to 1/3 the amount of electricity that incandescent bulbs utilize, and they can last up to 15 times longer.  Due to the fact CFL bulbs are a type of fluorescent lamp they contain mercury, which is toxic and complicates the disposal of CFL bulbs.

LED (light-emitting diode) is a type of bulb that produces light using a narrow band of wavelengths. LED lighting is more energy efficient than CFL bulbs, as well as all other types of fluorescent lighting. LED bulbs produce a unique color of light that is very similar to the natural light of the sun. LEDs reach their peak brightness as soon as they are turned on and do not require a warmup phase like incandescent or florescent bulbs.

The average incandescent bulb only lasts 1,000 hours before burning out. The average CFL bulb can shine bright for up to 8,000 hours of use. But neither can hold a candle to LED bulbs, which offer as much as 25,000 hours of light per bulb. LED bulbs are affordable but tend to cost more than CFL bulbs because of how long LED bulbs last, and because of that reason they pay for themselves over time.

CFL bulbs have been associated with the following symptoms:

Other health concerns include:

CFL bulbs produce a lot of UV beams. CFL bulbs release UV-B and traces of UV-C radiation. Some argue it’s not enough to cause harm unless you sit next to dozens of lightbulbs all day long.

Some people believe CFL bulbs can cause cancer. One study by Peter Braun based out of Alab Laboratory in Berlin, Germany found that CFL bulbs have noxious cancer-causing components that could spark cancer in those with a genetic predisposition. These agents include:

-Phenol—a partially acidic white crystalline strong that is generated from coal tar and used in the compound production process.

-Styrene—an unsaturated fluid hydrocarbon that is generated from petroleum.

-Napthalene—an unstable white crystalline compound that is made from refined coal tar and used as a crude material for substance fabricate.

What About Reported Radiation From CFL Bulbs?

In March of 2015, an anonymous source under the username Broken Duckfeet posted a video to Facebook that showed a  CFL bulb producing a “soft attack” from radiation. The video was accompanied by a message about how unhealthy CFL bulbs are because of the radiation they release.

Radiation is a big issue of concern right now, not only for CFL bulbs but for smartphones and other forms of technology as well. It’s easy to be more concerned about radiation coming off of your cell phone, which you hold up to your ear, keep in your pocket, and perhaps even sleep next to. Lightbulbs on the other hand, are generally a good distance away from you and therefore the radiation they release is far less potent to your health.

The World Health Organization (WHO) conducted a study on all of the available scientific literature on the matter and came to the following conclusion:

“In the area of biological effects and medical applications of non-ionizing radiation approximately 25,000 articles have been published over the past 30 years. Despite the feeling of some people that more research needs to be done, scientific knowledge in this area is now more extensive than for most chemicals. Based on a recent in-depth review of the scientific literature, the WHO concluded that current evidence does not confirm the existence of any health consequences from exposure to low level electromagnetic fields.”

That’s not to discredit people that report a host of symptoms possibly related to CFL bulbs. Someday science could detect verifiable links to these health concerns and very low levels of radiation. It just makes sense that some people would be more sensitive to radiation than others.

The WHO study adds, “However, a recent study from the United Kingdom Health Protection Agency has found that there are measureable levels of UV from single envelope CFLs when used at distances closer than 1 foot. As a precaution, it is recommended that these types of CFLs not be used at distances closer than 1 foot, for more than one hour per day.”

No matter who is right in the end, why risk the exposure to CFL bulbs when LED bulbs are more energy efficient, cost-effective, and do not contain mercury? Plus, they produce all around better light quality.