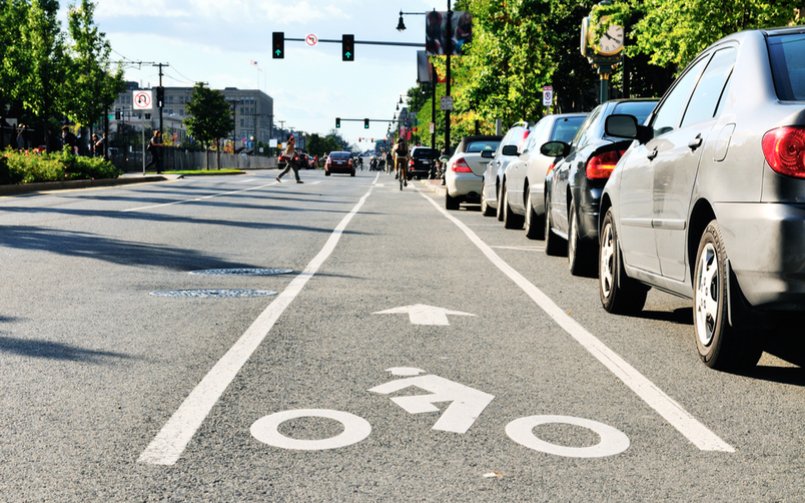 Installing bike lanes improves safety and encourages eco-friendly travel, but can adding bike lanes increase traffic congestion? This is a common concern since more people drive than ride bikes and to carve out room in the road for a bike lane, you must take away from motorist lanes.

How to Prevent Traffic Congestion When Adding a Bike Lane

Looking to Minneapolis—The Best City for Biking in the Nation

According to a report detailed by FiveThirtyEight, bike lanes do not cause traffic jams if they are constructed in the right locations. Just look at Minneapolis, considered by Bicycling magazine to be the ‘best city for biking in the US’ for several years running. Despite the fact several months of the year are freezing in Minneapolis, the city decided to add 45 miles of bike lanes in 2010 and 2011.

You might be thinking—but, wouldn’t fewer traffic lanes automatically increase vehicle congestion? To prevent faulty results, AADT is converted into an estimated number of cars on the road during peak traffic times. This number is then divided by the road’s capacity, giving us what traffic engineers refer to as volume-to-capacity (V/C) ratio.

V/C ratios between 0.5 to 0.75 indicate mild or moderate congestion, while V/C ratios between 0.75 and 0.9 indicate heavy congestion. Heavier congestion levels show roadways are at capacity and motorists have little to no room to switch lanes. We all know what it’s like to be stuck in traffic… it sucks. Adding bike lanes to roads with high V/C ratios will only make the problem worse.

Looking at the results from Minneapolis, it’s clear that taking away a motor lane in exchange for a bike lane increases the estimated V/C ratio in rush-hour traffic. Post-bike lane installation, busier streets show noticeably less room for vehicles to navigate between lanes. Although, these changes are not significant enough to increase congestion or further slowdown traffic.

It’s All About Installing Bike Lanes on the Right Streets

“Road Diet” is an actual term used to define the act of cutting away portions of roads that are wider than necessary. Roads that could afford to go on a diet are the best roads to add bike lanes to.

An important take away from Minneapolis is that bike lanes do not lead to increased congestion when installed in the right places. You don’t want to add bike lanes to a street that is already at or near capacity because taking away a lane will lead to some increase in congestion. On the other hand, adding bike lanes to streets that are under capacity can produce favorable results without adding to traffic issues.

The Result of a New Bike Lane in New York City

In 2010, New York’s Department of Transportation added a protected bike lane to a 1-mile stretch of road in Brooklyn, Prospect Park West. One of three vehicle travel lanes was removed to make room for the new protected bike lane. Shortly thereafter, local Brooklyn residents were surveyed about the effects of the new bike lane.  48% of people polled said they thought the bike lane was a positive change. 32% did not agree, saying the added bike lane was not a positive change.

Some people were so adamant against the bike lane they sued the city over it, saying the road was now unsafe for pedestrians trying to cross the street. Plus, they argued it reduced available parking and added to congestion issues. While all these arguments seem valid, a closer look at the situation showed otherwise. Sure, the bike lane did reduce available parking and pedestrians needed to look both ways before crossing the street, but congestion and commute times did not increase.

The city had collected plenty of data before adding the bike lane. This data was compared to new data collected after the bike lane was installed. The result? V/C ratios did increase during peak traffic times—morning and afternoon. Yet, none of these changes were significant enough to throw the street over capacity during rush hour. Additionally, it was found that commute times did not change after the bike lane was added. Largely, because Prospect Park West was under traffic capacity prior to the addition of the bike lane.