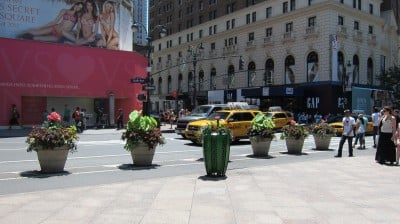 In June, Lou and I went to NYC to meet with some customers as well as spend a few days looking at the installations around the city.  It was a great trip and found ourselves on the half-full side of entertainment, as there is always something happening in Manhattan.  We were fortunate to find ourselves in the middle of filming for something that would air on National televisions sometime later.  I know that I have blogged about it before, but, NYC is the birthplace of so many commercials that are seen by hundreds of thousands, if not millions, of people on a weekly basis.  This particular commercial started its scene again in front of the iconic Madison square and headed Northeast along Madison Ave.  A cool shot, likely from the perch of a bucket in a bucket truck came west along 24th Street, by the Met Life building, as the Nissan Altima raced north on Madison Ave towards the high rent district of mid-town.  The truck made the right hand turn before the shot was cut to another angle.

I remember being there and having to wait to cross the road, and at other intersections, could not cross , as the film crews took, and re-took, the shot, looking for the perfect combination of sky, sun, and Nissan.  I honestly never thought that we’d see the commercial on TV, and at the time, I couldn’t be sure what the premise of the filming was for anyways – but, like most things that are filmed in NYC, the true star, for me, was the TerraCast Vase Planter and Step Planter Installations.  So, if you catch the commercial soon, check out the car, and the planters!