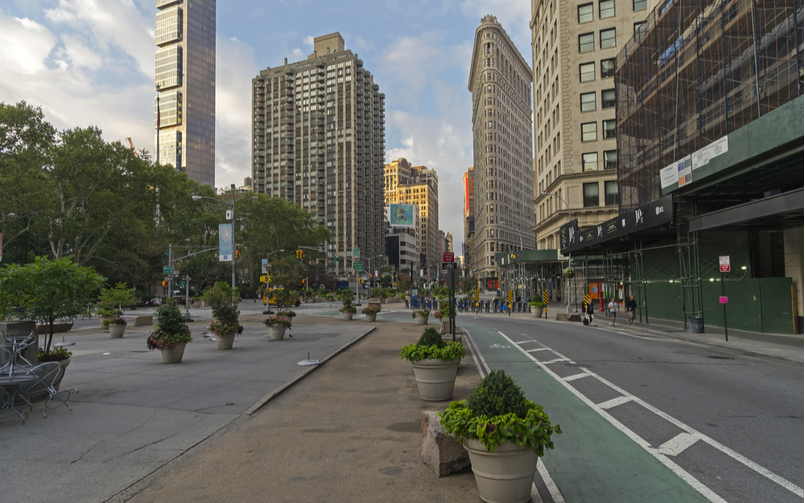 Parking spaces are gold, especially in big cities where parking is scarce. That’s why it comes as a shock to many that protected bike lanes are becoming more valuable than parking spaces. This realization came about in 2007, when New York City developed America’s first parking-protected bike lane.

The decision was made under the guidance of Janette Sadik-Khan who was hired as the chief transportation official for NYC in 2007. She was inspired by the streets of Denmark and decided to bring something similar to America, where bike lanes were not that well thought out. The very first parking-protected bike lane was in one of the busiest cities in the US, Manhattan.

Great news for bikers, the lane provided a safety buffer between cyclists and automobile traffic. Although, seemingly bad news for drivers, it took away parking spots that were already in limited supply.

At the end of the day, it was easy to see that the protected bike lanes offered a plethora of benefits. For one, they made it much safer to bike on the streets. In addition, they improved the flow of traffic for vehicles while increasing traffic to local retail stores and businesses.

The Dangers of Cycling in the City

The thought of cycling down a rural road can be dangerous enough, now see yourself cycling in a major city and the risks more than double. You could get pushed off the road by a speeding car, doored by someone quickly exiting their Uber, or hit by a massive bus.

According to Sadik-Khan, in the early 2000s it was incredibly dangerous to ride your bike in NYC. Maybe it was great for extreme sports fans, people who love a non-stop adrenaline rush as they narrowly escape death, but for most people it wasn’t a risk worth taking.

Today that has changed entirely with a huge surge in the number of people who bike around the city. The question everyone wants to know is – how did a city this busy and swamped with cars get so many people riding their bikes instead of clogging the already congested streets with more automobiles?

New Yorkers can thank Janette Sadik-Khan, who worked tirelessly from 2007 to 2013 leading New York City’s Department of Transportation in a new direction.

“I was responsible for 6,000 miles of street, 789 bridges, 12000 signalized intersections, 1.3 million street signs,” said Sadik-Khan. “We put down 400 miles of on street bike lanes, including one of the first parking protected bike lanes in the United States, and we did it on 9th Avenue between 23rd Street and 16th Street.”

This was such a significant milestone in America’s recent history because nothing like it had been done before in our country. Bikers took to it instantly because it’s far less stressful than traditional bike lanes. Yet, long before it got such overwhelmingly great feedback, it was a controversial topic.

A lot of people pushed back against the idea in fear of losing valuable parking spaces that were already in such limited supply throughout NYC.

“Taking away parking spaces is not for the faint of heart,” said Sadik-Khan. “And there is no super secret magic recipe that’s going to make it easier to do.”

Sadik-Khan’s goal was to make a case for what she was trying to do.

“The 9th Avenue pilot ran for 6 blocks and if you look at the blueprint for the street you’ll notice an alternating pattern. On blocks with right-hand turns, there’s an entire lane of parking but at left-turn turns, those parking spots are sacrificed for a barrier. The vehicles will wait next to the bike lane here, and separate signals for cars and bikes stagger to reduce the stress at the intersection,” explains a video by Vox.

The design worked brilliantly. Data has proven that the 9th Avenue bike lane boosted the local economy, improved mobility, and made the streets safer for everyone.

Here’s a look at some of the data so you can judge for yourself:

At the end of the day, the changes were positive for people on bikes, people on foot, and motorists, as well as business owners in the area. This set forth an example for other parts of NYC, as well as other cities in the US.

The miles of protected bike lane added throughout New York went through the roof at this point. By the year 2018, the city had over 1,200 miles of bike lane, 100 of which were protected.

As populations grow into the future, it’s so important that we design streets for people so that it is easier to walk, bike, and get around.

“That’s the kind of recipe for future success of cities,” exclaims Sadik-Khan. “The cities that make these kinds of investments and changes are the cities that are growing and thriving in this century.”