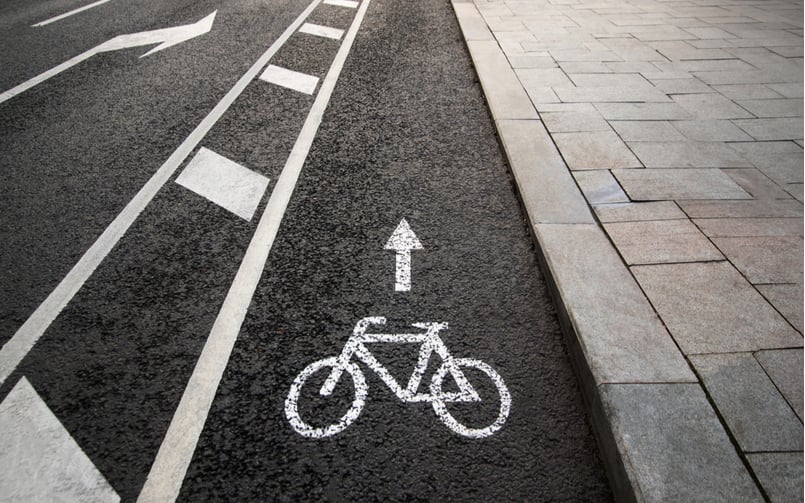 There are bike lane design standards put into place to help facilitate safer streets and to promote more people to bike around town. According to the AASHTO Guide for the Development of Bicycle Facilitates, a bike lane is technically defined as “a portion of a roadway which has been designated by striping, signing, and pavement markings for the preferential or exclusive use of bicyclists.”

At TerraCast Products, we make a variety of high-quality products right here in the USA that help protect bike lanes around the nation – from large planters to bollards with lighting fixtures. We are all about building greener cities for the future, and that includes adding more bike lanes that adhere to the latest bike lane design standards.

The Growing Popularity of Bike Lanes in the US

From busy urban cities to calm suburban towns, cycling has majorly increased over the years, leading to the development of new-age bike lanes. While bike lanes have remained an important component in Europe for years, the United States has more recently hopped on board, making an effort to install bike lanes in most major cities.

Below is an overview of some of the latest bike lane design standards.

The minimum width of a bike lane must measure 5 feet (1.5 meters) from the curb or the adjacent parking lane. If the bike lane is bordering a curb with a 1 to 2-foot gutter pan, the lane should be at least 4 feet wide. The width does not include the measurement of the gutter pan since cyclists would not be able to utilize this space.

The heavier the traffic volume and the greater the vehicle speed, the wider bike lanes should be. This is also true if pedestrian traffic is expected to clog bike lanes– for instance if no sidewalks are present or if the street gets a lot of foot traffic.

Side note… are pedestrians even allowed to use bike lanes? Pedestrians are technically not allowed to run, walk, jog or hail a cab from bike lanes if there is a sidewalk present.

Bike lanes should be present on both sides of a two-way street since it is a given that cyclists will have to merge with motor vehicle traffic. It is considered a hazard to place a two-way bike lane on one side of the street. Instead, cyclists should travel in the same direction as cars in their own designated lanes.

What Side of the Street Does the Bike Lane Go On?

When a one-way street is involved, the bike lane should be placed on the right side of the street. In some cases, it might make things safer if the bike lane is placed on the left side, but in most cases, it will go on the right. Some examples of when bike lanes may go on the left include if there are frequent bus or trolley stops, if a high number of vehicles make right-turns on the street or if a high number of cyclists make left turns.

Contra-flow bike lanes are typically not recommended because they tend to encourage cyclists to ride against the flow of traffic and this is a leading cause of accidents for motorists and cyclists.

Only in certain situations is a contra-flow bike lane design utilized, such as:

There are specific instructions for bike lane markings addressed in the Manual on Uniform Traffic Control Devices in section 9C. The white stripe between the bike lane and the vehicle lane should measure (at minimum) 4 inches wide. For even better division of space, it is recommended to use a 6 to 8-inch wide line.

If parking is permitted beside the bike lane, it is important to define each parking space with a solid 4-inch wide white stripe that is clearly visible. If reflectors are used to help guide traffic, it is important that they are placed on the motorist side of the line as they can cause a cyclist to lose control of their bike.

According to section 9B of the manual, the R3-16 sign must be used at the start of a bike lane so that everyone knows there is the potential for cyclists ahead. When a bike lane comes to an end, there needs to be the same R3-16 sign that reads END instead of AHEAD. In addition, the R7-9 or R7-9a sign should be utilized on streets where vehicles are permitted to park or may pull into a bike lane.