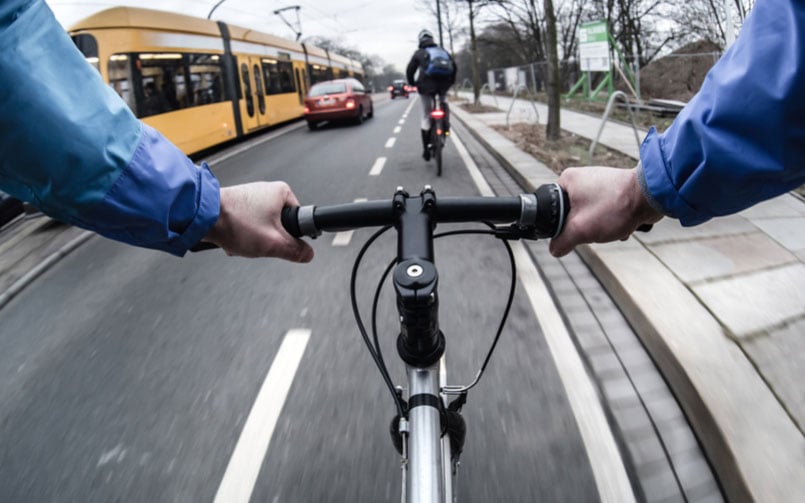 Bike lanes are intended to make people feel safe when riding their bike alongside traffic. Narrow bike lanes and other design flaws can make a bike lane incredibly unsafe, preventing people from using it or putting them in danger when they do. If a bike lane doesn’t feel safe, most cyclists will not take the risk and they will ride elsewhere.  This decreases the bike-ability of a city, and it can also decrease traffic to storefronts in an area.

In general, there are two types of bike lanes. The first physically separates bikers from traffic with some type of divide such as a curb, row of planters, a bollard, or even parked cars. Secondly, there are bike lanes that are distinguished by markings in the road that designate the shoulder of the road for bikers only. While this can be effective, it is not as safe as a physical barrier, or separated bike lane, because if a biker or driver veers from their path, there’s nothing physically in the way to separate the two from colliding.

Cities commonly adopt the latter form of bike lanes because it’s affordable to spray paint some lines onto the road and add a couple signs. If the bike lane is wide enough and there are plenty of signs, marked bike paths work. Although, there is nothing safe about narrow bike lanes, especially ones that lack some type of physical barrier.

One biker made modifications to his bike to make himself feel safer while biking along this road. He shortened the handle bars on his bike so that he could keep a few extra inches between his bike and cars.

Think of it like this: if the average bike has a handlebar width of 2 – 2 ½ feet, that leaves just ½ to 1 foot of space between a bike, the curb, and passing motor vehicles. As a result, bikers have no room for error and the same goes for motorists. Many cyclists are being clipped by cars and falling off their bikes.

In reality, these bike lanes are too narrow to be considered bike lanes at all. A bike lane should be at least 4 feet wide, although, 5 feet is a more appropriate width to keep bikers and walkers safe from traffic.

Narrow bike lanes are popping up all over the US. In addition, many bike lanes suddenly shift in size, becoming much narrower without warning.

Bike lanes can quickly become unsafe when they aren’t properly respected. For instance, people may park in a bike lane or even use it to get around traffic if the lane is not properly marked or acknowledged. As a result, cyclists are forced to exit the designated bike lane in order to move around vehicles, thus, putting them in danger. If cars can get away with parking in a bike lane without being ticketed (or noticing a sign that warns against parking there) it is no longer a safe bike lane for people to utilize.

The case of the disappearing bike lane is a common site in some towns, typically seen near intersections. Intersections are some of the most important areas for bike lanes, and yet this is where they often trail off, leaving bikers to fend for themselves. The reasoning for this is that vehicles need the extra space for left-hand turns, which makes perfect sense, but there has to be a way around leaving cyclists in dangerous positions.

Painted lines may provide an adequate barrier on roads that receive light traffic, but they can quickly become a cause for concern on busier stretches of road. Separated bike lanes are heavily encouraged on streets that get a lot of traffic.

When a bike lane is wide enough, manholes and sewer grates don’t pose such a threat because bikers can simply steer around them. Although, a narrow bike lane doesn’t allow enough space for bikers to safely get around bumps in the road such as this. As a result, a cyclist may be forced to swerve into traffic.

We are here to help you make bike lanes safer with sturdy bollards. Bollards create a physical barrier between traffic and cyclists. Plus, they can be outfitted with lights to improve safety and visibility after dark. Shop our collection of bollards