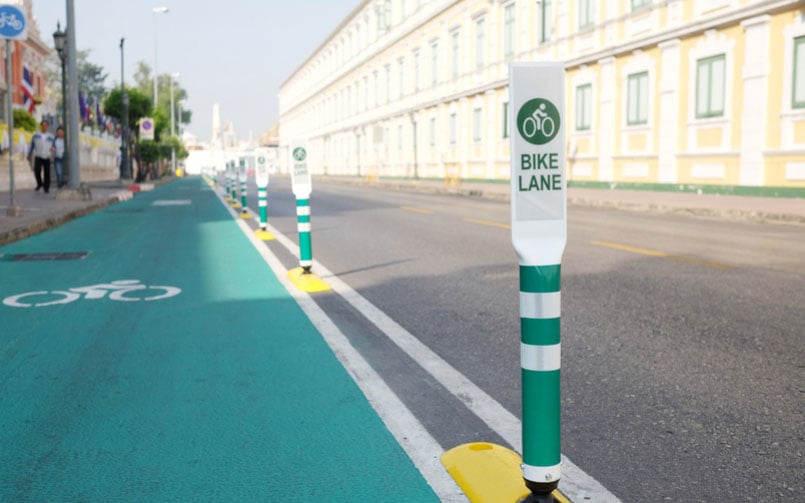 Different barriers are commonly used for protected bike lanes, such as parked cars (great for busy cities that need more parking spaces), planters, or bollards. The goal is to provide a physical barrier between cyclists and automobiles. On the other hand, unprotected bike lanes rely on lines striped in the road to signal where cyclists have the right of way—and this can lead to a lot of room for error and accident.

Protected bike lanes are commonly seen in busy cities where riding a bike is often quicker than taking a car. New York, San Francisco, and Chicago are just some of the larger cities to implement protected bike lanes in recent years.

Many bike lanes are unprotected, leaving cyclists more vulnerable to accident. In fact, according to a published study titled Route Infrastructure and the Risk of Injuries to Bicyclists, protected bike lanes increase safety and reduce injuries by 89%. This isn’t just good for cyclists, it’s also good for drivers. For one, it gives drivers one less thing to worry about out on the road. Secondly, it can reduce traffic because if there is an injury or accident between a driver and a cyclist, it’ll cause backups.

2. Increased Safety and Walkability for Pedestrians

Adding protected bike lanes can reduce biking on sidewalks by as much as 56%. When pedestrians don’t have to share the sidewalk with bikers, it becomes safer for them to walk places. It also leaves more room for people to stroll in groups, push a stroller, etc. By making pedestrians feel more comfortable, you can increase foot traffic, which can have economic benefits (more on that in a minute).

Within the first year of adding protected bike lanes, cities documented an average 75% increase in the number of bikes. Makes sense considering 71% of Americans reported they would like to ride bikes more often but have concerns over the safety of riding bikes on roadways, according to NHTSA Volume II: Findings Report National Survey of Bicyclist and Pedestrian Attitudes and Behavior. By adding protected bike lanes, people are more likely to ditch their car and hop on a bike and that’s a good thing.

More bikers in your city can:

You can encourage the development of more protected bike lanes by talking to your elected officials.

What Are Protected Bike Lanes Made of?

30% create parking spaces so that parked cars provide the barrier

We offer the strongest planters (browse planters) and bollards (browse bollards) around—capable to stand up to all kinds of wear and tear.