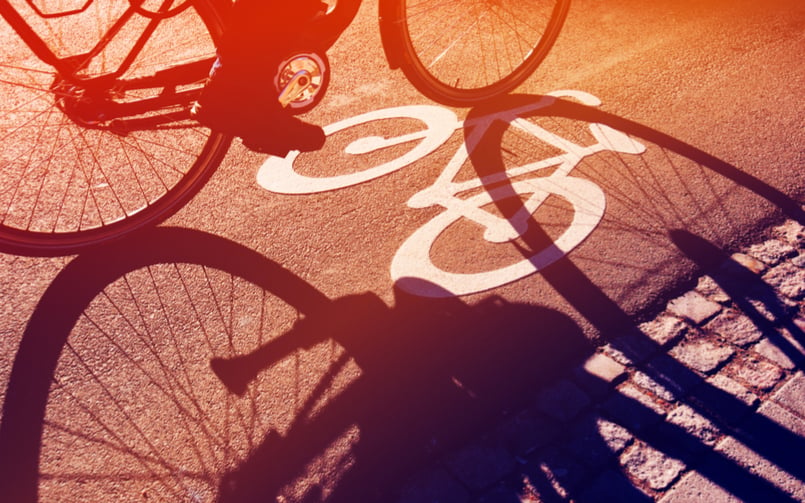 Looking for ways to improve bike lane safety? Many cities around the world are searching for better and safer ways to implement bike lanes. Luckily, there are many successful examples you can take inspiration from.

Some of the most commonly discussed ways to improve bike lane safety include widening bike paths or adding solid bollards as a protective barrier. Although there is one key way to reduce injuries to cyclists, as well as auto drivers, that is often overlooked and ignored. It’s to reduce vehicle speed.

Speed is the leading killer when it comes to automobile accidents. The faster a car is going, the more damage it will cause due to greater impact. While bike lane design is usually focused on bikes, the speed of automobiles should be taken into consideration as well.

According to a report produced by the National Transportation Safety Board (NTSB), speed-related accidents are “comparable to that attributed to alcohol-impaired driving.”

Yet, despite these findings, a recent bike safety report mentioned a variety of things – including alcohol – as key factors that put bikers in danger. Although, their report fails to mention speed, which is arguably just as important.

Even the biggest bike lane advocates in the industry often forget to cite speed as a contributing factor to harm and even death amongst cyclists. Perhaps that’s because speed is seen as one of those “uncontrollable” factors, but that’s not necessarily true. In fact, there are a lot of different things we can do to promote slower driving out on the roads.

Jennifer Ruley works on bicycle developments as a senior project manager at the New Orleans transportation department. She feels that the issue of speed is all too often overlooked, “In my experience, speed is seldom discussed until a new bike or pedestrian facility is proposed,” she said. “That’s just crazy.”

According to research on traffic stress conducted by Peter Furth at Northeastern University, auto speeds are one of the main factors that impact the overall safety of bike lane designs, and speed even tends to impact how many people choose to bike on a road. In fact, the factors used to assess the overall stress level of a given street include the posted speed limit and how fast cars really travel on that street, as well as the number of lanes, the width of the bike lane, parking availability, and the presence of physical barriers between bike lanes and automobiles.

You can make bikers feel safer on roads by simply reducing vehicle speeds.

Some ideas to reduce vehicle speed include:

In New York, renovations involving bike lanes at Allen and Delancey Street resulted in a 54% reduction in pedestrian injuries. The number of injuries reported after renovations were compared with the previous six years during the same time period, October through May.

You can see similar results at Four Plazas, including Pike and Monroe Street, where new bike lanes reduced pedestrian injuries by 60%.

So, aside from reducing automobile speeds, what types of changes result in a 60% reduction in injuries? Here are some ways to improve bike lane safety that could help you accomplish the same or similar results.

There are many ways to improve bike lane safety and TerraCast is here to help. Browse our collection of durable resin-based planters that have been used in many of the redesigned bike lanes and public plazas throughout New York City, as well as all across the US.

Prefer to use solid bollards as a physical barrier? We make those too! Browse Bollards