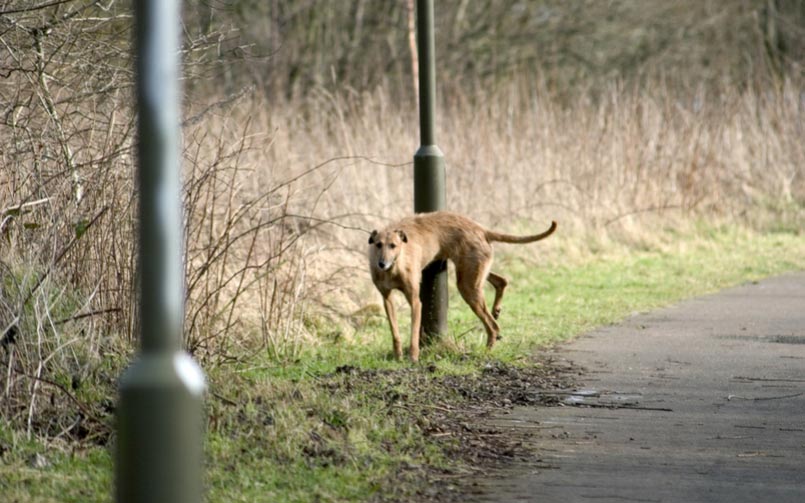 There are an increasing number of reports regarding lampposts falling over, and the reason why? Dog pee! A neighborhood in downtown San Diego watched a lamppost crash to the ground on an otherwise quiet Thursday night. Luckily, no one was standing near the lamppost when it tumbled to the ground, and surprisingly, even though cars were parked nearby, no cars were damaged in the incident.

When authorities arrived on the scene to remove the pole, experts determined the lamppost’s demise was caused by none other than dog urine. Day after day of dogs lifting their legs on the lamppost finally took its toll.

Urine rapidly speeds up the corrosion process, which is already set in motion by rain and the progression of time. Once corrosion becomes severe enough, the lamppost is very weak and susceptible to complete failure. Prior to the pole falling over, authorities assume a car lightly bumped it, further weakening the base. After the slight collision, dogs continued to pee on the lamppost base, eventually causing it to succumb to corrosion and fall over.

Residents in the area say their dogs loved peeing on the lamppost, but never did they think this would be the result of it. Authorities are now urging neighbors to have their dogs pee on the fire hydrants instead, they are made of cast iron and won’t rust.

It all starts with the Light Pole Base

The bottom of the lamppost provides the most support, but it’s also susceptible to the most damage. The base is where dog’s pee, and it’s also where cars, golf carts, and weed whackers hit. The base is the first thing that wears down, and when nothing is done about it, the entire pole suffers and complete failure sets in.

Our lampposts are made different so that they resist corrosion unlike any other lamppost on the market. Yet, just because the base of your lamppost is corroding or weak, doesn’t mean your entire post needs to be replaced just yet. That’s where Light Pole Bases come in handy, offering the perfect solution to replace lampposts with corroded or damaged bases. Our Light Pole Base Covers fit securely around lampposts, protecting the pole against further damage.

Light Pole Base Covers come standard in black. For a small fee, bases can be made in any color to match your lamppost. Learn more about our Light Pole Bases

All in all, we are confident that if applied at the appropriate time, our Pole Base could have saved that lamppost in sunny San Diego.

But that’s not what happened…

And San Diego isn’t the first city to witness lampposts falling over because of dog pee. The same storyline recently played out to the north of San Diego, in San Francisco, California. Keep in mind, San Francisco, and especially San Diego, have very mild weather, meaning corrosion, in general, is going to happen slower than it would in other parts of the country.

Lisa Kornfield’s car was hit by the falling light post in San Francisco, and she was almost hit as well. Luckily, Lisa escaped without injury. According to city workers, dog urine was the cause of this falling lamppost as well. As a dog-owner herself, Lisa said she couldn’t be mad at the neighborhood dogs for ruining her day. “My dogs walk here,” she said. “I can’t guarantee they haven’t peed on this street light.”

The Importance of Checking on Light Posts

Light posts are heavy and can cause a lot of damage and injury if they fall over without warning. That’s why it’s so important for local officials and residents to always be on the lookout for corroded lampposts in need of replacement or repairs.

Signs Lampposts Need to be Repaired or Replaced:

-There are chunks of topcoat missing, which means water, urine, and other elements are getting inside and causing further corrosion.

-The pole is wobbly when you shake it.

-The pole appears to be tilting or unsteady.

Why TerraCast Poles Are So Resistant To Corrosion

Dogs can pee all over TerraCast lampposts, these durable lampposts are non-porous and resistant to rust and corrosion. Traditional lampposts are made from metal and covered in a thin layer of powder coat or baked enamel to resist corrosion. The thin protective layer works for a little while but it doesn’t take long for it to wear away. All it takes is one little bump from a baby stroller or a weed whacker and a tiny crack can form in the topcoat, allowing things like moisture and dog urine to seep inside and corrode the metal.

Our true composite light poles are made different to resist a much wider range of elements and exposures. Each pole is crafted with an inner core made from galvanized steel, the steel is fully encased in a thick layer of polyurethane foam. This foam creates the shape of the lamppost, and most importantly works to protect the core from exposures that would otherwise lead to corrosion. The quarter-inch thick outer layer of the pole is made from Linear Low Density Polyethylene resin. LLDPE is a member of the plastic family, but it’s far more durable than your average plastic product. LLDPE is specially formulated to live outdoors for many years.

Our lampposts are second to none, shop our wide variety of LED lighting fixtures HERE